Some of the highlights include:
..so lots of useful technical resources to call upon. 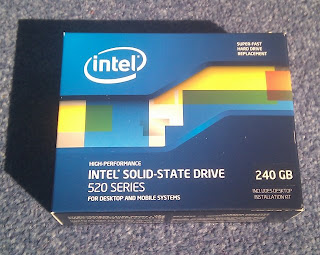 I've been fortunate to get my hands on an Intel ® 520 2.5" 240GB Solid State Drive so I thought I'd put it through some relatively simple tests to see how well it performs.


My first round of tests involved seeing how well it performs in terms of power consumption compared to a typical laptop spinny Hard Disk Drive.  I rigged up a Lenovo X220i (i3-2350M @ 2.30GHz) running Ubuntu Precise 12.04 LTS (x86-64) to a Fluke 8846A precision digital multimeter and then compared the SSD with a 320GB Seagate ST320LT020-9YG142 HDD against some simple I/O tests.  Each test scenario was run 5 times and I based my results of the average of these 5 runs.

The Intel ® 520 2.5" SSD fits into conventional drive bays but comes with a black plastic shim attached to one side that has to be first removed to reduce the height so that it can be inserted into the Lenovo X220i low profile drive bay. This is a trivial exercise and takes just a few moments with a suitable Phillips screwdriver.   (As a bonus, the SSD also comes with a 3.5" adapter bracket and SATA 6.0 signal and power cables allowing it to be easily added into a Desktop too).

In an idle state, the HDD pulled ~25mA more than the SSD, so in overall power consumption terms the SSD saves ~5%, (e.g. adds ~24 minutes life to an 8 hour battery).

I then exercised the ext4 file system with Bonnie++ and measured the average current drawn during the run and using the idle "baseline" calculated the power consumed for the duration of the test.    The SSD draws more current than the HDD, however it ran the Bonnie++ test ~4.5 times faster and so the total power consumed to get the same task completed was less, typically 1/3 of the power of the HDD.

Finally, using tiobench I calculated that the SSD was ~7.6 times faster than the HDD and again used about 1/4 the power of the HDD.

So, overall, very good power savings.  The caveat is that since the SSD consumes more power than the HDD per second (but gets way more I/O completed) one can use more power with the SSD if one is using continuous I/O all the time.    You do more, and it costs more; but you get it done faster, so like for like the SSD wins in terms of reducing power consumption.


Although ureadhead tries hard to optimize the inode and data reads during boot, the HDD is always going to perform badly because of seek latency and slow data transfer rates compared to any reasonable SSD.   Using bootchart and five runs the average time to boot was ~7.9 seconds for the SSD and ~25.8 seconds for the HDD, so the SSD improved boot times by a factor of about 3.2 times.  Read rates were topping ~420 MB/sec which was good, but could have been higher for some (yet unknown) reason.


Palimpsest (aka "Disk Utility") has a quick and easy to use drive benchmarking facility that I used to measure the SSD read/write rates and access times.  Since writing to the drive destroys the file system I rigged the SSD up in a SATA3 capable desktop as a 2nd drive and then ran the tests.  Results are very impressive: 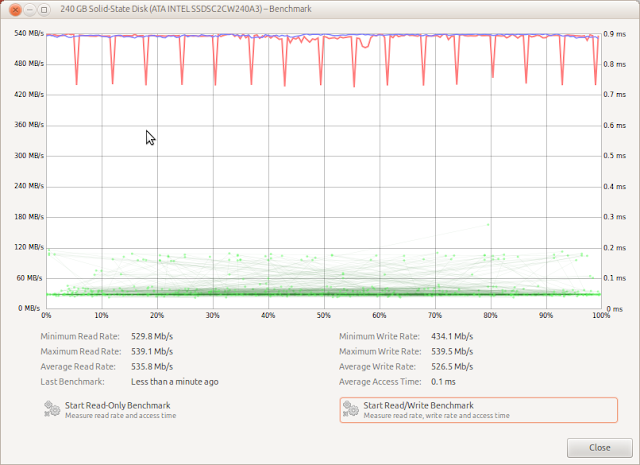 This is ~7 x faster in read/write speed and ~200-300 x faster in access time compared to the Seagate HDD.


So which file system performs best on the SSD?  Well, it depends on the use case. There are may different file system benchmarking tools available and each one addresses different types of file system behaviour.   Which ever test I use it most probably won't match your use case(!)  Since SSDs have very small latency overhead it is worth exercising various file systems with multiple threaded I/O read/writes and see how well these perform.  I rigged up the threaded I/O benchmarking tool tiobench to exercise ext2, ext3, ext4, xfs and btrfs while varying the number of threads from 1 to 128 in powers of 2.  In theory the SSD can do multiple random seeks very efficiently, so this type of testing should show the point where the SSD has optimal performance with multiple I/O requests. 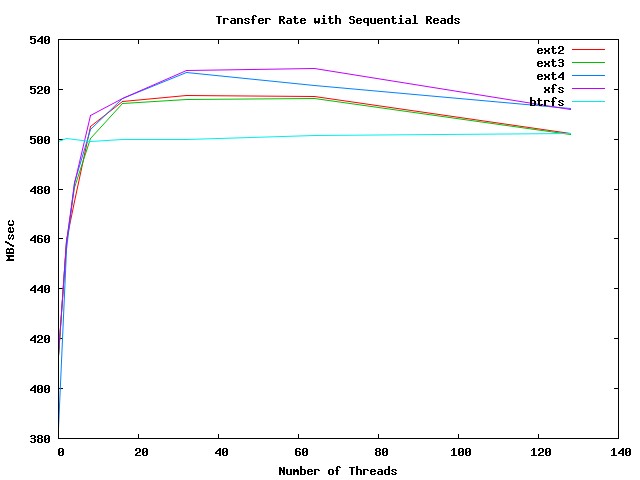 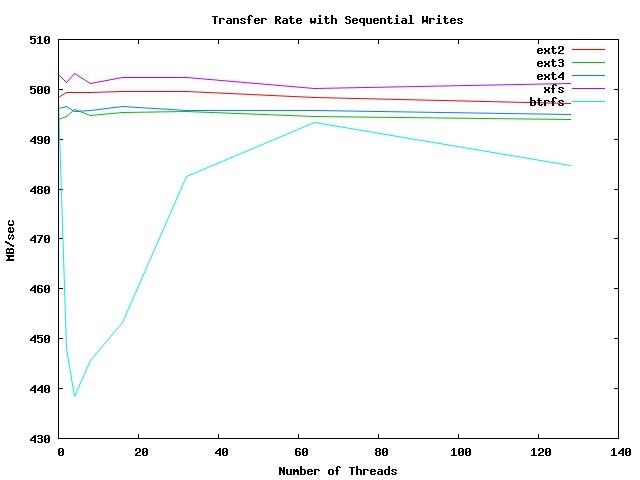 xfs is consistently best, where as btrfs performs badly with the low thread count. 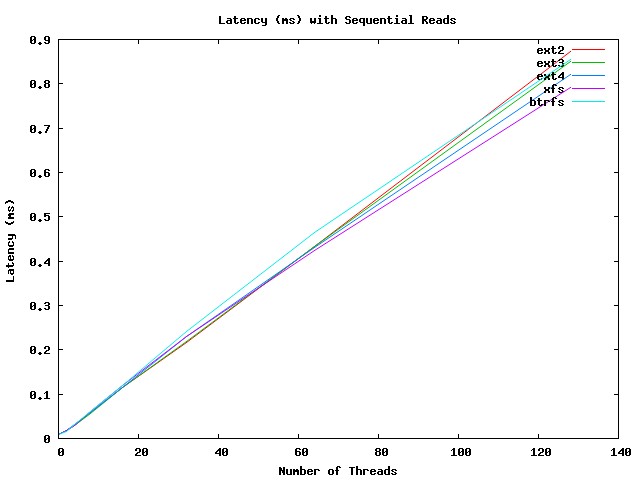 These scale linearly with the number of threads and all file systems follow the same trend. 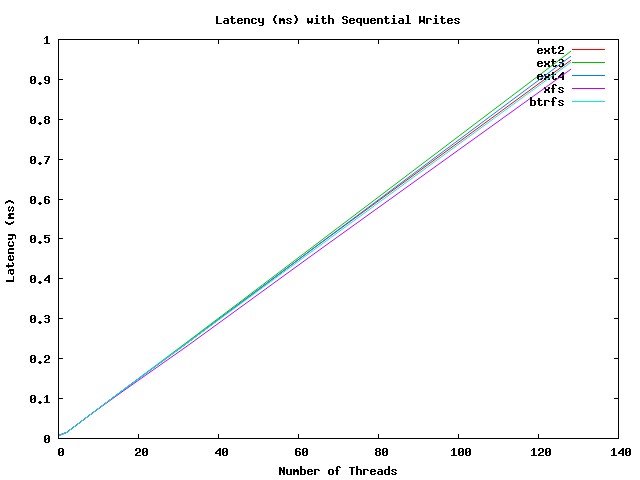 Again, linear scaling of latencies with number of threads. 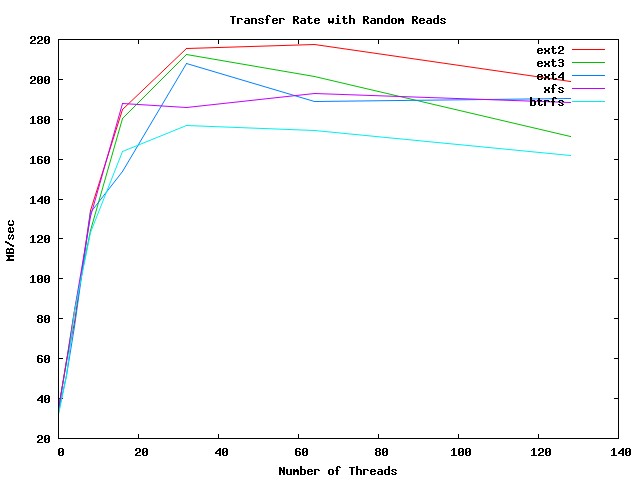 Again, best transfer rates seem to occur at with 32-64 threads, and btrfs does not seem to perform that well compared to ext2, ext3, ext4 and xfs 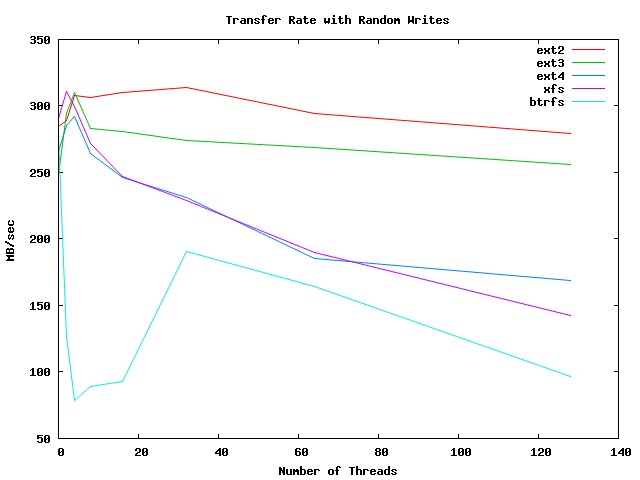 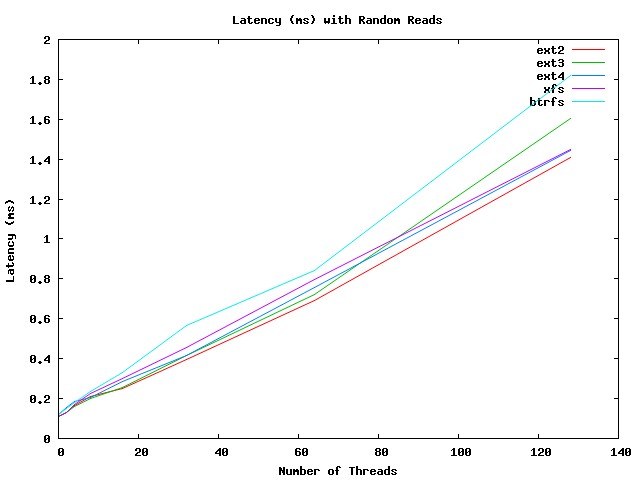 Again the linear scaling with latency as thread count increases with very similar performance between all file systems.  In this case, btrfs performs best. 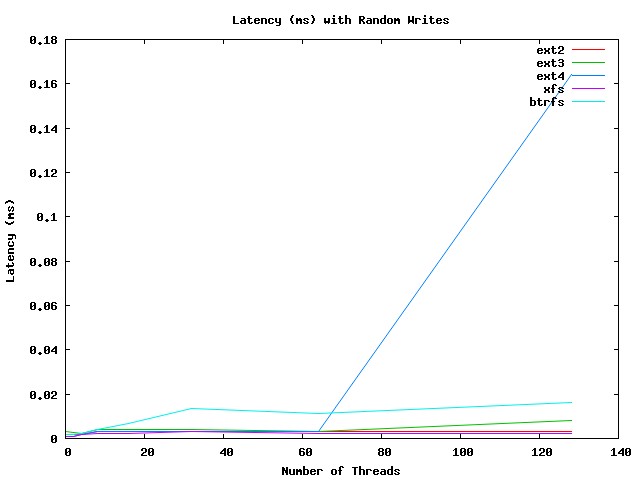 With random writes the latency is consistently flat, apart from the final data point for ext4 at 128 threads which could be just due to an anomaly.

Which I/O scheduler should I use?

Anecdotal evidence suggests using the noop scheduler should be best for an SSD.  In this test I exercised ext4, xfs and btrfs with Bonnie++ using the CFQ, Noop and Deadline schedulers.   The tests were run 5 times and below are the averages of the 5 test runs.

So for ext4 on this SSD, Noop is a clear winner for sequential I/O.

It appears that Deadline for xfs seems to perform best for sequential I/O.

And for btrfs, Noop is marginally better for sequential writes and re-writes but Deadline is best for reads.

So it appears for sequential I/O operations, CFQ is the least optimal choice with Noop being a good choice for ext4, deadline for xfs and either for btrfs.   However, this is just based on Sequential I/O testing and we should explore Random I/O testing before drawing any firm conclusions.

As can be seen from the data, SSD provide excellent transfer rates, incredibly short latencies as well as a reducing power consumption.   At the time of writing the cost per GB for an SSD is typically slightly more than £1 per GB which is around 5-7 times more expensive than a HDD.    Since I travel quite frequently and have damaged a couple of HDDs in the last few years the shock resistance, performance and power savings of the SSD are worth paying for.
Posted by Colin Ian King at Friday, June 01, 2012 7 comments: